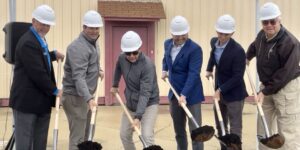 Officials turn the first shovel of dirt for the Brakeman project in downtown Lebanon.

Ground has officially been broken on Lebanon’s Brakeman Building. The four-story mixed-use building will feature 44 market rate apartments, and 5,000 square-feet of restaurant/retail space. Initial plans had called for the first phase of Forza’s “Shift” project to be constructed on the east side of State Road 39/Lebanon Street, on the site of the former Estes and Kincaid auto dealerships. The establishment of an Opportunity Zone in 2017 made beginning the work on the west side of State Road 39 a more attractive initial financial option. The demolition of the New Life Recovery Home will begin immediately, with the completion of the Brakeman Building set for the spring of 2023.