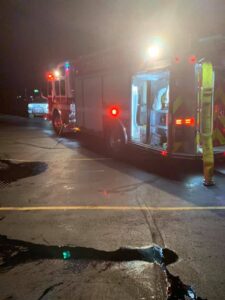 On June 9th, 2021, at 11:43 PM, crews were dispatched to Hendrickson Trailer for a commercial building fire. The first arriving crews reported heavy smoke showing from the rear of the building. It was quickly determined that the fire was contained in a large dust filtration system designed for the welding units. An attack line was pulled off the first fire apparatus to extinguish the fire. The collection system sits on the exterior of the building, but the large volume of smoke rapidly filled the building. Fire crews remained on the scene until the building was cleared of smoke and the duct system inside the building could be inspected to extinguish any embers within the piping. All units marked back in service with no injuries reported from building occupants or emergency crews.