You Are Here:Home>Obituaries>Herschel Wayne Lewis 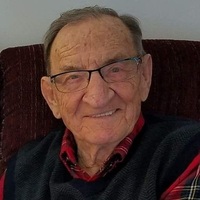 Herschel graduated from Sheridan High School in 1944. He then went on to serve in the Army during WWII in the 1st Cavalry and later in the Korean Conflict as a paratrooper in the 187th Airborne Regimental Combat Team. Upon his return to civilian life, he worked at the Sinclair Oil Company’s Research Laboratory in Harvey, IL and later had the opportunity to come back to Central Indiana to work for Eli Lily’s Tippecanoe Laboratory in Lafayette, IN, from which he retired.

He experienced many things in his lifetime. While in the Army, he traveled to the South Pacific, Philippines, Japan, Korea, Hawaii. He was a Union Arbitrator while at Sinclair Research, Waste Treatment Engineer at Eli Lily, Past Commander of American Legion Post #67 of Sheridan, IN, member of WWII Roundtable and a 60+ year member of the Unitarian Universalist Church. At the ripe young age of 91, he published his autobiography “Climbing Mountains:  Autobiography and Selected Writings” to the absolute delight of his family and friends.

His many interests and activities ranged from reading great poets like Kipling and Frost, writing his thoughts down and sharing, walking in the woods, family genealogy, and riding his bike for miles in the countryside. His love of sports started at a young age when he was an athlete at Sheridan High and later Franklin College. He had a great passion for most sports and could be found watching the TV intently cheering on IU, Purdue, the Colts and listening to the Indy 500 on the radio. He later could be found in the stands watching his great-great nieces play basketball for State Champions Heritage Christian.

Family and friends will gather Sunday, Dec. 12, for visitation from 2 p.m. until the time of the funeral service at 4 p.m. with the Rev. Jennie Barrington officiating in the Strawmyer & Drury Mortuary, 2400 N. Lebanon Street, Lebanon. Memorial contributions in his memory may be made to the Sheridan Historical Society or the Unitarian Universalist Church of Tippecanoe County.