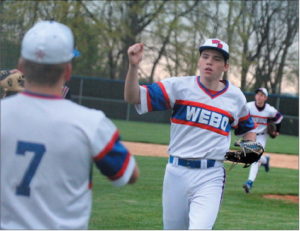 It was a tall task for the Western Boone tennis team Tuesday afternoon. After a 4-1 loss to Frankfort on Monday night, the Stars realistically need to win all of their remaining Sagamore Conference matches if they wanted to win at least a share of the Sagamore Conference title for the first time since 2008.
To make it even more difficult, they were hosting three-time defending conference champion North Montgomery, who hadn’t lost a conference match since 2016.
But the Stars dug deep when they needed too, defeating the Chargers 3-2 at Western Boone.

Western Boone head coach Philip Webb has seen Tyler Brunty grow as a pitcher this year. Tuesday night, the Stars sophomore had his best performance when his team needed him. Brunty pitched a complete-game shutout against Southmont, and scored the games only run in a 1-0 Western Boone victory.

The Lebanon baseball team lost to Crawfordsville 4-3 on Tuesday night.

The Lebanon golf team topped Crawfordsville 185-216 on Monday afternoon. Toby Meyer was the medalist with a 42.