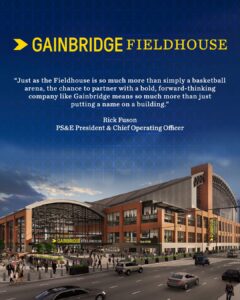 The home of the Indiana Pacers has a new name.  Pacers Sports & Entertainment announced Monday that the event venue will now be called Gainbridge Fieldhouse.  Indianapolis-based Gainbridge entered into a multi-year deal with the Pacers.  The arena was most recently known as Bankers Life Fieldhouse, originally Conseco Fieldhouse when it opened in 1999.