You Are Here:Home>RadioMom Local News>Incident Causes Evacuation At The Witham Family YMCA 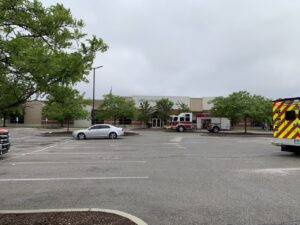 At approximately 10:40 am Friday fire crews were dispatched to the Witham Family YMCA, 2791 N. Lebanon Street, on a reported Hazardous Materials incident. Lebanon fire units arrived on scene to find a large chemical vapor cloud outside the building. At the time of the incident, several children were on site attending day camp. Units from Lebanon and Center Township Fire Departments along with Lebanon Police Officers, and Boone County EMS personnel evacuated the children and employees from the premises. Boone County Senior Services assisted with transporting the children to a safe area to await the arrival of parents and guardians. Once all occupants were accounted for, firefighters entered the building to contain the chemical release. Firefighters located, contained, and diluted the chemicals involved.
At this time fire officials and investigators believe the cause of the release was an accidental mixture of pool chemicals. A contractor at the location for maintenance of the indoor swimming pool mistakenly filled a chemical holding tank with the wrong compound, causing a chemical reaction. The contractor, along with three other employees were evaluated by Boone County EMS and released. No other illnesses or injuries have been reported. During the incident, Witham Hospital and Crown Pointe Senior Living Community were notified and instructed to shelter in place.