You Are Here:Home>Obituaries>James “Mike” Pearman 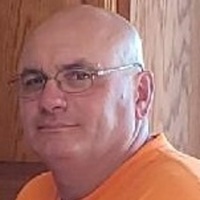 Mike was born August 12, 1968 in Danville, a son of the late James Pearman and Sharon (Games) Batts.  He married his best friend Anita Pearman on March 23, 1996 and she survives. They celebrated 25 years together this year. Mike loved to eat and Anita loves to cook, so it all worked out well.

He worked as a diesel mechanic for Estes Express Lines for almost 18 years, up until his death.  Mike was a member of the Harvestime Fellowship Church in Jamestown.  He loved mowing his grass (the way he liked it) and enjoyed farming with Rob Farrow and Travis Lee. Harvest season was his favorite time of the year. Mike enjoyed spending time with his boys, whether they were shooting hoops, watching sports, watching a movie, joking around or wrestling, he loved every minute of it.

In addition to his parents, Mike was preceded in death by brother, Les Pearman and mother-in-law, Joyce Thomas.