You Are Here:Home>Obituaries>Janet Sue Randle 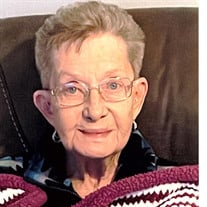 Mrs. Janet Sue Randle, 80, passed away Saturday, December 4, 2021, at The Waters of Lebanon. She was born September 23, 1941, in Lebanon, Indiana, a daughter of the late Edward and Edith (Sheets) Warren.
Janet was a 1959 graduate of Jackson Township High School in Clinton County. She had worked for more than 30 years doing title checks for Wrecks. She also had worked as a claim’s supervisor for M. Plan Insurance.
Janet was a member of the New Brunswick Church of Christ and a member of the Lebanon Eagles Club. She enjoyed fishing, camping, and wintering in Florida over the years. She was a devoted wife, mother, and grandmother.
Survivors her five children, Larry (husband, Ted Howell) Randle of Indianapolis, Crystal Randle of Muncie, Rodney (companion, Beth) Randle of Lebanon, Brian (Becky) Hughes of Jamestown, Lisa Sue Randle of Lebanon; seven grandchildren; several great grandchildren; nephew, Duane Rader of Indianapolis.
In addition to her parents and her husband, Janet was preceded in death by a sister, Jeannie Rader.
Graveside Funeral Services are planned for 2:00 p.m. on Tuesday, December 14, 2021 at Old Union Cemetery, rural Jamestown, Indiana.
Porter and Hunt Funeral Home & Crematory, 315 West Main Street in Jamestown, Indiana in handling her arrangements.
Memorials may be directed to the charity of the donor’s choice.