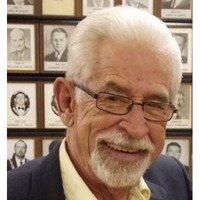 Jerry Leroy Breedlove was born at home in Whitestown, Indiana on June 15, 1938 to parents Leroy and Thelma (Allen) Breedlove. He was the second of five children: Carol, Jerry, Paul Wayne, Max, and Wanda. He got his first job when he was just a boy, riding his bike around with his brother Paul Wayne, picking up bottles in the park on the south side of Lebanon. If you know either one of them, you know they probably created more mischief than revenue.

Jerry graduated from Lebanon High School in the summer of 1957 and he held countless classmates in his heart as dear friends. He stayed in touch with many of them over the last six decades and took pride in planning their class reunions.

After high school, Jerry joined the United States Air Force and was stationed in Anchorage, Alaska. If you’ve met Jerry, you’ve probably heard a story or two about his time there. The time he spent in Alaska was one of the highlights of his life and he frequently spoke about the beauty of the land and all the misadventures he and his fellow airmen would drum up. His favorite story to tell, though, was the time that he held  Jayne Mansfield in his arms for a dance when she visited his base for a USO show.

Soon after returning home from the Air Force, Jerry met the love of his life, Agnes Overman, on a blind date. He picked her up from the Methodist School of Nursing and he always said he fell in love with her the moment he saw her coming down the stairs that evening. They were married shortly after on September 10, 1961, and through 60 years of marriage, his eyes still twinkled when he spoke of her.
Jerry and Agnes were overjoyed to welcome their first daughter, Jill, in the summer of 1971 and their second daughter, Joy, arrived in the fall of 1973. Over the years their family grew to include grandchildren and even great-grandchildren in Jerry’s lifetime. They kept their family close with weekly Sunday dinners and annual summer fishing trips at the lake. If you ever stopped to chat with him in the driveway, he would tell you how blessed he was to have such an amazing family. He was incredibly proud of the family that he and Agnes built and would never miss a chance to brag on each and every member. He taught his children and grandkids the importance of hard work, timeliness, and enjoying a cheap beer and a cigarette on the porch swing at the end of a long day.

If anyone was ever deserving of the title “Jack of All Trades”, it was Jerry. He held many different jobs over the years as well as maintaining his own small business, Breedlove Auctioneering Service, from 1974-2005. He retired from his position as Paymaster at Allison Transmission/EDS in 1996, then worked for Boone County Sheriff’s Department as a corrections officer. After that he worked for the Boone County Highway Department for several years. He was a very hardworking man and even after finally retiring for good, he still found ways to keep himself busy through serving his community.

Jerry was involved with many clubs and charities in Boone County. He became a Mason in 1967 and later became a president of the Boone County chapter of the  Murat Shrine. He was a lifetime member of the Lebanon Elk’s Lodge and loved spending Friday evenings with his and Agnes’s close friends. Jerry was very proud of the time he sat on the Board of Directors at the Lebanon Boys and Girls Club. He loved all people, but children brought him a special joy. He never left home without a few rubber bands in his pocket, just in case he got a chance to teach a kid his famous “rubber band trick”. For many years, Jerry and Agnes lived across the street from Parkwood Healthcare, and Jerry spent countless hours there visiting with patients and brightening the days of staff members. He even received a “Volunteer of the Year” award for his time spent there. Jerry held penny auctions at Parkwood for the residents, as well as auctioneering for countless other charity events over the years. They also lived around the corner from the Lebanon Little League baseball diamonds, and Jerry loved to walk over to cheer on the teams and make sure the ball park was looking nice.

Jerry had such a huge heart for people and would have done just about anything for just about anybody. He never knew a stranger and he truly lived up to his motto: “It’s just so easy to be nice.”

Family and friends will gather Thursday, January 13 from 4-8 p.m. with Elks Rites at 7:30 p.m., funeral service will be Friday, January 14 at 11:00 a.m. with Masonic Rites in the Strawmyer and Drury Mortuary, 2400 N Lebanon Street, Lebanon, Indiana.

Memorial contributions in Jerry’s memory may be made the Lebanon Boys and Girls Club, 403 W Main Street, Lebanon, Indiana 46052