You Are Here:Home>Obituaries>Jerell (Jerry) E. Isenhour 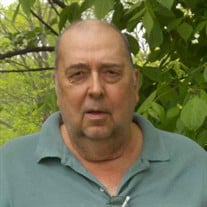 Jerell (Jerry) E. Isenhour, 72, passed away at Methodist Hospital in Indianapolis, IN on Wednesday, 01/26/2022 after years of numerous health problems.
He was born on June 11, 1949 at Witham Hospital in Lebanon, IN to the late Harold and Marjorie (Burgin) Isenhour and was raised in the Fayette Community in Boone County.
Jerry met his future wife, Sandra (Sandy) Sue Johnson in 1957 when he was in the 2nd grade and Sandy in the 1st grade at Perry Central School in Boone County, IN. They were married at Bethesda Baptist Church in Brownsburg on March 21, 1970 and would have celebrated their 52nd anniversary in March.
He was a 1967 graduate of Lebanon High School and in 1971 he graduated with a bachelor’s degree from Indiana State University.
Jerry worked twenty-one years at Pennsylvania Truck Lines in Avon, IN from 1972 to 1993 and nineteen years at Maplehurst Bakery in Brownsburg from 1995 to 2014, where he retired in 2014. He was the owner of Slapshot Collectibles and also co-owner of Indy Connection Sports Collectibles in Indianapolis with his brother-in-law, Wayne Johnson.
He was a devoted Christian and loved his family, especially his three grandchildren beyond words. Jerry was a member of Mt. Tabor Baptist Church in Fayette, IN.
Survivors include his wife, Sandy of Brownsburg and his son, Derek (Alison) Isenhour of Brownsburg; three grandchildren; Damon Jones of Southport, IN, Adam Isenhour and Lauren Isenhour of Brownsburg.
In addition to his parents, three daughters are deceased: Angela (Isenhour) Jones, twins: Jenny & Amy Isenhour who were stillborn in 1972, brother, Richard Isenhour and brother-in-law Wayne Johnson.
He loved gardening (which he liked to share with his neighbors), hunting, fishing and golfing until his health prevented it and watching NASCAR, NFL, soccer and hockey. Baseball card, sports memorabilia and genealogy was his favorite pastime. He started working on his family history in 2002 and spent all of his free time updating the family files.
Due to COVID19 there will be no calling. Memorial Graveside Services will be held at the Johnson Family Cemetery south of Fayette, IN on St Rd 267 at a later date.
Memorials may be given in his memory to the Johnson Family Cemetery Fund (mailing address: 135 Torrey Pine Drive, Brownsburg, Indiana 46112), Mount Tabor Baptist Church or to your favorite charity.
Myers Mortuary has been entrusted with his arrangements.