You Are Here:Home>Obituaries>John D. Surber 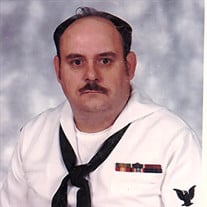 He was a 1969 graduate of Lebanon High School. John proudly served his country honorably in the United States Navy for twenty years as a storekeeper.

John served as a volunteer fireman with Lebanon Center Township and volunteered with the safety crew at Indianapolis Raceway Park. He was also a life member and past president of the Lebanon VFW and a life member of the American Legion in Lebanon. John was a kind and genuine person who loved being surrounded by his family at gatherings, which he especially enjoyed the desserts. John never met someone who he didn’t consider a friend and will be missed my many.

In addition to his parents, John was preceded in death by one brother, Richard T. Surber.

Visitation will be held 10:00 a.m. until the time of service at the funeral home in Lebanon.

Memorials may be directed to the Center Township Fire Department 525 Ransdell Road, Lebanon, IN 46052.