You Are Here:Home>Obituaries>John David Hawkins 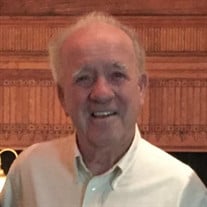 John David Hawkins, 85, of Lebanon, Indiana, passed away at his home on December 29, 2021. He was born in Lebanon, Indiana on February 15, 1936; a son of the late Robert Richard and Alice Mae (Campbell) Hawkins.

He attended Lebanon High School and served his country honorably in the U.S. Marine Corps during the Korean War.

On October 26, 1957, he was married to Yolanda (Martinez) Hawkins at Walnut Street Baptist Church in Lebanon. They enjoyed 61 wonderful years together before she passed away on August 7, 2019.

John retired after 50 years of dedicated service with United Technologies Carrier, formerly known as Bryant Heating and Cooling. He was active in Boy Scouts, serving over 50 years; earning numerous awards and honors. John was a member of First Baptist Church.

He was an avid sports fan and enjoyed attending Lebanon High School basketball games. John had a stubborn side, but beneath that was a kind, hardworking and generous soul who would help anyone in need and devoted to his family whom he dearly loved.

Funeral Services with military rites will be held at 5:00 p.m. on Thursday, January 6, 2022, at Myers Mortuary, 1502 North Lebanon Street in Lebanon, Indiana.

Visitation will be held from 2:00 p.m. until the time of service at the funeral home in Lebanon. He will be laid to rest with his wife at a later date at Oak Hill Cemetery in Lebanon. Boone County Crematory has been entrusted with his cremation following services.

In lieu of flowers, memorials may be made in his memory to your favorite charity of choice.