You Are Here:Home>Obituaries>John E. Ferriell, Jr. 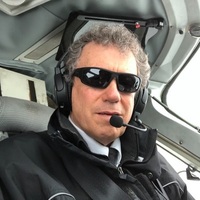 John was preceded in death by his Mother, Anna Marie Ferriell.

John was a pilot, he started flying in 1978, he loved to flight instruct new students.  When he retired from Alcoa/Silgan in 2003 he pursued his flying career full time. He flew charter for Sky Castle Aviation in New Castle, IN then went on to work for Paragon Air in Charleston WV, and finished his career at Mountain Air Cargo; as a FedEx feeder Pilot. He loved to fly, give rides, and talk to anyone that would listen about flying especially children.

One of his favorite places to visit was the Smokie Mountains, he shared that love with his wife and son, Kendrick.  He loved to be outdoors. He loved to hike, bike, run, play tennis, fly RC and drones. He was a beekeeper, along with his wife, at his Lebanon home. He grew up on a farm with his brothers in Richmond, Indiana where his father and brothers still reside. He always talked fondly of the wonderful memories he had there with his Mom, Dad, and brothers growing up.

Anyone that knew John would say he always greeted them with a warm smile, he was a kind and generous man.  He will greatly be missed by his wife, family and friends.

Memorial contributions in John’s memory may be made to: