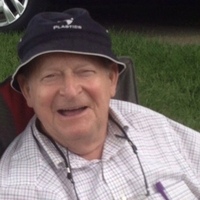 John Vincent Spitznogle, 85, died Saturday evening, June 26, 2021, surrounded by his family. Born April 8, 1936, in Cass County, Indiana to Nora Bauer and Paul Carl Spitznogle, he was the youngest of 10. He was baptized at St. Joseph Roman Catholic Church in Logansport, where his grandfather, Felix Bauer, made the 650,000 bricks used to build the church.

He attended Saint Joseph Roman Catholic School through the eighth grade, where he made life-long friends. He was a proud graduate of Washington Township High School, he was an enthusiastic member of the Yell Team – Go Hatchets!

After a stint as a cook in the U.S. Army, he was accepted as an apprentice at General Motors; he retired from in 2001 after 44 years as a Tool and Die Maker. He was grateful for the opportunity to provide for his family and the great friendships he made there.

John and his wife Meg, moved to Boone County shortly after their 1960 marriage, raising four children and tackling farming as a second job. They purchased the home farm, naming it Chinkapin Oak Farm after the large oak tree in the back yard. Whether the tree is actually a Chinkapin is up for debate.

He was a dedicated and faithful member of Saint Joseph Roman Catholic Church in Lebanon, where he enjoyed membership in the Holy Name Men’s Club, the Knights of Columbus, Cursillo, and any committee that would have him, and also provided sweet corn for funeral dinners. He was thrilled that a church capital campaign was marketed around the idea of getting him off the roof. He was most proud of being able to use his wood working skills to help make the altar in the renovated church.

John’s hobbies included lovingly restoring furniture, salvaging wood from buildings that were being torn down, travelling, entering projects in the Boone County Fair, cheering for Purdue, volunteering at Second Helpings, wine making, his Friday evening “Whitestown Run,” and woodworking – including making his own casket.

He loved hosting parties, including the annual Holy Name Steak Fry in the 1970s, square dances, wedding receptions, hayrides, and his epic Martin Luther King, Jr. Fish Fry that began as a group of his GM buddies frying fish, playing Euchre, and imbibing in his wine in 1989.

He took great pleasure in being an uncle to his numerous nieces and nephews so much that he encouraged anyone who crossed his path to call him “Uncle John.”

He was preceded in death by his parents, and brothers and sisters, Eleanor, Louise, Cletus, Gertrude, Lucille, Felix, Bernadine, Joan, and Joseph.

Family and friends will gather on Thursday, July 1 to pray the Rosary at 8:45 A.M. and for visitation from 9:00 to 11:00 at Saint Joseph Roman Catholic Church, 319 E. South Street, Lebanon, IN 46052, followed by the Mass of Christian Burial celebrated by Father Pat Click and concelebrated by Father Phil Bowers at 11:00. John will be interred at Saint Joseph Catholic Cemetery in Lebanon.

You are invited to visit the website www.strawmyerdrury.com where you may sign his online register and leave a personal message.