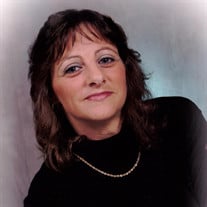 Judy Ann Aldridge, 56, passed away Friday, November 5, 2021, at Witham Memorial Hospital in Lebanon. She was born in Lebanon, Indiana on October 13, 1965; a daughter of Tina (Hoogeveen) Wines and the late Daniel Webster Leo Wines.
She attended Lebanon High School. She was married to David R. Ruckle in Lebanon and later divorced.
Judy worked at Big Lots in the retail department. Later she worked at Prairie Industries and then she worked in the cafeteria for Perry Worth Elementary School.
She frequently attended Lebanon Bible Baptist Church. In her younger days, she enjoyed swimming. She also loved horses, scrapbooking and cherished the time she had with her family and grandchildren.
Survivors include her mother, Tina Wines of Lebanon; one son, Daniel R. (Melody) Wines of Lebanon; four grandchildren, Zach Ruckle, Harper Wines, Henry Wines, Noah Poole; one brother, Garry Wines of Lebanon; two sisters, Monica L. Wines of Lebanon and Barbara C. (Richard) England of Crawfordsville; along with numerous nieces and nephews.
In addition to her father, Judy was preceded in death by a son, James A. Ruckle.
Funeral Services will be held at 6:00 p.m. on Thursday, November 11, 2021 at Myers Mortuary, 1502 North Lebanon Street in Lebanon, Indiana with visitation from 4:00 p.m. until the time of service at the funeral home in Lebanon.
Myers Mortuary and Boone County Crematory have been entrusted with her cremation following services.
Memorials may be directed to the Wounded Warrior Project, P.O. Box 758517, Topeka, Kansas 66675.