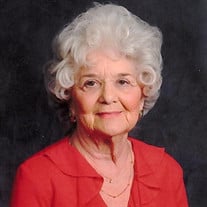 Mrs. Leona June Ausherman, 87, passed away, Monday morning, November 22, 2021, at Homewood Health Campus in Lebanon, Indiana. Born in Hale, Missouri on April 30, 1934, she was the daughter of the late Martin Jessie and Laura Lydia (Dziggel) Bowen.
She moved to Indiana with her parents in 1937. She was a 1952 graduate of Whitestown High School, where she was a basketball cheerleader and won the Boone County cheerleader trophy her senior year.
Following high school, June was employed with Stewart Warner in Lebanon as office ditto writer and later assistant file clerk.
On September 18, 1952, she was married to Jack Lynn Allen. Together, they had three children and later divorced. On April 12, 1967, she was united in marriage to Sgt. Donald Welty Ausherman in Glendale, Arizona. After 54 loving years together, Don survives.
She was a devoted homemaker and was a Red Cross volunteer for ten years. June was proud of her family and centered her life around them and their respective activities. In addition, she enjoyed traveling, playing the piano, volunteering in local nursing homes and helping out at Lebanon Rock Church whenever there was a need.
Survivors include her husband, Don Ausherman; five sons, Jeffrey (Christa) Allen, Jason (Rosa) Allen, Jordan Allen, Jansen (Sherrie) Ausherman, and Jarrett Ausherman; twelve grandchildren; numerous great grandchildren.
In addition to her parents, June was preceded in death by her brothers, Ralph Bowen and Dale Bowen; and two sisters-in-law, Beverly Bowen and Patricia Bowen.
Funeral Services are to be held at 12:00 p.m. on Saturday, November 27, 2021 at Myers Mortuary, 1502 North Lebanon Street, in Lebanon, Indiana.
Visitation will be held at Myers Mortuary in Lebanon from 10:00 a.m. to 12:00 p.m. on Saturday, Interment will follow at Pleasant View Cemetery west of Lebanon, Indiana.
Memorials may be directed in June’s memory to the charity of the donor’s choice