You Are Here:Home>Obituaries>Kenneth Michael Whitaker 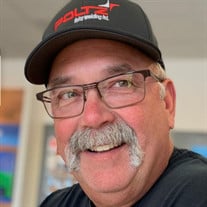 Kenneth Michael Whitaker, age 65, Pleasant Hill, MO, died February 5, 2022. Michael was preceded in death by his brother, Nicholas Alan Whitaker. He is survived by his wife of 41 years, Sheryl Lynn Oberle Whitaker; his two sons, James Jerico Whitaker of Jefferson City, MO and Joshua Nathaniel Whitaker and wife Julie of Odessa, MO; and grandchildren Jackson, 13, and Emma, 10. Michael is also survived by his parents, Paul William and Joyce Gale Whitaker of Lebanon, IN and sister Debra and Michael Campbell also of Lebanon, IN.

Michael was born a firecracker baby on July 4, 1956 in Crawfordsville, Indiana. Michael was a 1974 graduate of Zionsville High School, Zionsville, IN. Shortly after he began working at Panhandle Eastern Pipe Line as a casual laborer working his way up to Senior Specialist of Mechanics and Reliability. After more than 45 years of service, he planned to retire in 2022. Michael was a loving family man. He was often attending his grandchildren’s sporting events and was the infamous family photographer. Michael also enjoyed watching Jerico in numerous theatrical productions. He enjoyed being outside with the dogs, he loved shooting for sport, especially trap shooting. hunting, and fishing. Michael was an amazing handyman and mechanic. He was always working on a project, whether it was woodworking, remodeling or tinkering. He was a volunteer fireman for many years. He lived a life of service. He lived and loved life to the fullest.

The family will receive friends from 9:00 a.m. to 11:00 a.m. on Saturday, February 12, 2022 at Myers Mortuary, 1502 North Lebanon Street, Lebanon, Indiana. Funeral Services will follow the
visitation starting at 11:00 a.m. Michael will be inurned in both Lebanon, IN and Smithton, MO at a later date. The family would request memorials in lieu of flowers to the grandchildren’s college fund in care of Sheryl Whitaker or the American Cancer Society in honor of Nicholas A. Whitaker.