You Are Here:Home>RadioMom Local News>Law Enforcement Investigates Barricaded Male Subject With A Firearm 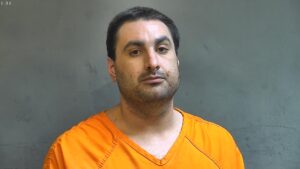 At 12:35 PM, the Boone County Special Response Team took Mr. Nicholas Schuhler into custody.
In summation, at approximately 4:57 AM this morning, the Boone County Communications Center received a phone from a concerned citizen that Mr. Nicholas Schuhler had pointed a gun at them.
The concerned citizen left the area, all the while Mr. Schuhler was said to have continued to point the firearm at the citizen as they drove out of the area. Shortly thereafter the concerned citizen called 911 to report the incident.
Upon law enforcement’s arrival on-scene, Mr. Schuhler retreated into a nearby family member’s residence. Law enforcement was able to set up a perimeter around the residence and evacuate all those within the residence, other than Mr. Schuhler. Shortly after, multiple residences near the residence of interest were evacuated as well, as a public safety measure.
Once the Boone County Special Response Team and the Boone County Crisis Negotiation Team arrived on-scene, the process of trying to establish communications commenced. Multiple efforts were made by the negotiation team to make contact with Mr. Schuhler, all of which were unsuccessful. After exhausting all avenues of communication, the decision was made to send in a robot in an attempt to locate Mr. Schuhler’s location within the residence. It was at this time we found that Mr. Schuhler had barricaded himself in the garage area that had been renovated into a living area.
It was then decided that gas projectiles would be introduced into the residence in an effort to get Mr. Schuhler to exit the house and peacefully surrender. Shortly after the projectiles were deployed, Mr. Schuhler briefly exited the residence, with the firearm in his hand, and then shortly thereafter he returned back inside, where he remained for the duration of the incident until his apprehension.
Gas projectiles and pepper balls were deployed into the residence multiple times with no effect. It was then decided that a small, flying, drone be introduced into the residence to once again try to pinpoint Mr. Schuhler’s location within the residence. Doing this allowed us to not only pinpoint Mr. Schuhler’s location but also check on his welfare. This tactic ultimately allowed the Special Response Team to identify where Mr. Schuhler was within the residence. Shortly after that, more gas projectiles, along
with a flashbang was introduced into the residence, followed by the Special Response Team. It was due to the above-listed actions and tactics that Mr. Schuhler was apprehended without injury to himself, the officers on-scene, and/or the public.
Mr. Schuhler is currently being held in the Boone County Jail on the preliminary charges of Pointing a Firearm (x2) and Possession of a Firearm without a License. Also, the firearm that Mr. Schuhler was brandishing during this incident was a Taurus PT 58 S .380 ACP. The firearm, along with 1 magazine, and 12 rounds of Hornady .380 auto, were seized and placed into BCSO evidence.