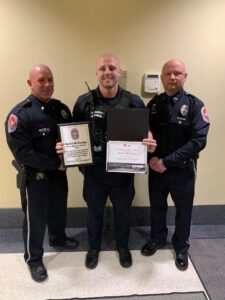 On Monday, March 8, 2021, Lebanon Police Officer Austin McCloskey was honored for his efforts in keeping the roadways safe in 2020. Officer McCloskey has been a police officer with the Lebanon Police Department for two years. Officer McCloskey was presented with the Mothers Against Drunk Driving (MADD) award. MADD is the nation’s largest nonprofit working to end drunk driving, help fight drugged driving, support victims of these violent crimes, and prevent underage drinking. The MADD award is presented to an individual who has gone above and beyond to champion the mission of MADD by putting time and resources into removing impaired
drivers from the roadways.
Along with the award, Officer McCloskey received a pin that reads “MADD HERO”. The pin is red and symbolizes MADD’s mission to represent the victims of impaired driving crashes. More specifically, for peace officers, the pin memorializes and honors those
peace officers who have been injured and killed in impaired driving collisions. In addition to being awarded the MADD award, Officer McCloskey received the Lebanon Police Department 2020 Officer of the year award.