You Are Here:Home>Obituaries>Ligia “Tati” Agudelo 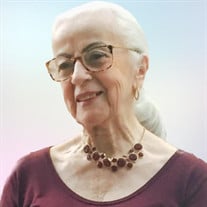 Ligia “Tati” Agudelo, 84, passed away Sunday, May 23, 2021, at Witham Memorial Hospital in Lebanon, Indiana, surrounded by her loved ones. She was born in Caramanta, Colombia, on December 30, 1936, a daughter of the late Jose Jesus Giraldo and Pastora Gonzalez.

She came to the United States in the mid-1960s in hopes of continuing her nursing career.

She was a member of the St. Joseph Roman Catholic Church in Lebanon. Ligia was a devoted mother, grandmother, and homemaker. In addition to her grandchildren, she truly loved the many children she cared for over the years. She enjoyed being outdoors, dancing, and was a wonderful cook, known by her family as the best flan maker in the world.

Survivors include her daughter, Natalia Agudelo and significant other, Matthew Hamilton, of Lebanon; four grandchildren, Tommy, Lucas, Toby, and Cynthia all of Lebanon; as well as many extended family members.

Myers Mortuary and Boone County Crematory have been entrusted with her arrangements.

A Celebration of Life will be held at a later date.

In lieu of flowers, memorials may be directed to the Boone County Cancer Society, 117 West Elm Street, Lebanon, Indiana 46052.