You Are Here:Home>Obituaries>Lloyd William Walker 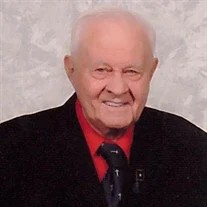 Lloyd William Walker, 91, passed on January 7, 2021 at Riverwalk Village in Noblesville, Indiana. He was born on September 29, 1929 in Indianapolis, Indiana; a son of the late Lloyd G. and Evelyn B. (McCrane) Walker

Lloyd dedicated over 25 years honorably serving in the Indiana National Guard. He retired from General Electric after 27 years and later owned and operated Walker Appliance Service in Whitestown, Indiana.

He was a faithful member of Mts. Runn Baptist Church in Zionsville, Indiana for forty years. Lloyd was a kind, and hardworking man who enjoyed card games and playing Euchre. Lloyd loved watching sports and was an avid IU basketball and Indianapolis Colts fan.

In addition to his parents, and first wife, Lloyd was preceded in death by a sister, Phyllis Haston.

Private Family Services will be held at 11:00 a.m. on Tuesday, January 12, 2021 at
Myers Mortuary, 1502 North Lebanon Street in Lebanon, Indiana. Those attending are asked to follow the CDC guidelines, please wear a mask and practice social distancing.

Due to the current pandemic, the services may be viewed on the Myers Mortuary Facebook page beginning at 11:00 a.m. on January 12th.

Memorials may be made in Lloyd’s memory to the American Cancer Society, 5635 West 96th Street, Suite 100, Indianapolis, Indiana 46278.