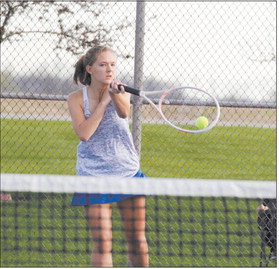 WeBo Golf
The Western Boone golf team placed third in a three-way meet with Clinton Prairie and Sheridan at the back-nine at Cool Lake.
Clinton Prairie won with a 189, with Western Boone placing second with a 194 and Sheridan shooting a 224.
Luke Marsh led the Stars with a 43.
Bryce Richardson and Aaron Dickerson shot 49 and 50 respectively, with Tyler Dickerson shooting a 52. Dane Williamson shot a 64 for the Stars.
Western Boone is back in action Saturday at Ulen for the Lebanon Invite.

Western Boone Baseball
The Western Boone baseball team lost to Clinton Prairie 24-18 on Monday night.
Down 2-0 after an inning, the Stars tied the game in the top of the second on an RBI-double by Tyler Brunty and an RBI-single by Caleb Irion.
But the Gophers scored seven in the bottom of the inning to take a 9-2 lead.
Western Boone came right back in the top of the third, scoring six times. With the bases loaded and one out, Jeremy Huss walked to drive in a run, and Brunty followed with a 2-run double to make it 9-5.
The Stars reloaded the bases with two outs, scored two runs on wild pitches, then made it 9-8 on a RBI-single by Josh Benson.
But once again, momentum didn’t stay in one place for long, as the Gophers scored six runs in the bottom half of the inning to go up 15-8.
Western Boone got two in the top of the fourth on a 2-run homer by Huss, but Clinton Prairie scored six more (all with two outs) in the bottom of the fourth to go up 21-10.
The Stars tried to rally in the top of the fifth, getting an RBIsingle by Adam Konz to made it 21-11, before a 3-run double by Brett Wethington made it a 21-14 ballgame. Jonathan McAtee and Brunty added RBI-hits in the inning to bring the Stars within five.
After the Gophers got a run in the bottom of the fifth, Wethington hit a 2-run homer in the sixth to bring the Stars within 22-18, but they wouldn’t get any closer.
Konz was 3-for-5 with three runs scored for the Stars, while Wethington was 3-for-5 with five RBIs and three runs scored. Brunty was 3-for-5 with four RBIs and two runs scored, with Huss going 2-for-4 with three RBIs and three runs scored.
Adam Pratt took the loss for the Stars, who host Southmont Tuesday.

Zionsville Softball
The Zionsville softball team lost to Harrison 8-2 on Monday evening. Down 1-0 in the first inning, Zionsville got its two runs on a 2-run home run by Callie Rheinheimer.
The Eagles next two batters drew walks, but were stranded. The Raiders scored twice with two outs in the third to go up 3-2, then added three in the fourth to go up 6-2.
Harrison did more two-out damage in the sixth, getting a double and a homer with two outs to go up 8-2. Lucy Garrett, Morgan Pressley and Emma Drew also had hits for the Eagles in the loss. Anna Stewart took the loss.