You Are Here:Home>Obituaries>Lonny B. McGee 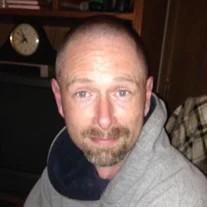 Lonny attended schools in Lebanon and was a lover of music, cars and animals. He enjoyed Odyssey racing, fishing and baseball in his youth.

He married Michelle (Sams) of Manchester, KY on September 17, 2004 and is survived by his children Lonny Edward (15) and Allie Colleen (13). He was preceded in death by his unborn son, Matthew Gregory.

He is survived by brother David (Dawn) Isenhower of Ohio; Grandmother Dora (Maxwell) Isenhower and sister, Sarah (Luke) Kilpatrick of Alabama, as well as siblings Donovan and Shannon Wyatt of New Mexico. He is also survived by sister-in-law, Magan (Sams) Stull and mother-in-law, Jan Sams. He will be missed by his many nieces, nephews, aunts, uncles and cousins.

In addition to losing his father and son, he was also preceded in death by grandparents, Charles Isenhower, Molly Shaw, Paul Shaw and Theodore McGee, Aunt Diana Kercheval, cousins, Sarada Hinton and Jared Jones and father-in-law, Rev. Frank Sams. In lieu of flowers donations requested to ALS Foundation P.O. Box 96, Natick, MA 01760 or alsfoundation.org/give or in care of Myers Mortuary.

Visitation will be held from 2:00 until the time of service on Friday at the funeral home in Lebanon. Those attending are asked to follow the CDC guidelines, please wear a mask and practice social distancing.

In lieu of flowers, memorials may be made in Lonny’s memory to the ALS Foundation for Life, P.O. Box 96, Natick, MA 01760 or in care of Myers Mortuary.