You Are Here:Home>Obituaries>Loretta Geraldine Redman 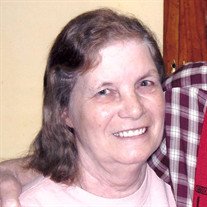 Mrs. Loretta Geraldine Redman, 81, passed away peacefully at home in Thorntown, Indiana on Wednesday, February 10, 2021. She was born in Lebanon, Indiana on November 26, 1939, a daughter of the late Ralph S. and Ruth S. (Neavilles) Culley.

In 1958, she and James moved from Lebanon to Thorntown where she had since resided. She worked for Modern Cleaners, Cooperative Seeds, and had cleaned houses for many years.

Loretta enjoyed cooking and baking. She loved being outdoors tending to her flower and vegetable gardens. But, most of all, Loretta loved her family and friends and thoroughly enjoyed spending time with each of them.

In addition to her parents and her husband, Loretta was preceded in death by five brothers, Ralph C. Culley, Fred Culley, Jack Culley, Steven Culley, and Bill Culley.

Graveside Services will be held at 11:00 a.m. on Friday, February 19, 2021 at Maple Lawn Cemetery in Thorntown, Indiana.

Myers & Hunt Mortuary and Boone County Crematory have been entrusted with her arrangements.

The family requests that memorials be directed to the Thorntown/Sugar Creek Fire Department.