You Are Here:Home>Obituaries>Lovie Joyce Carney 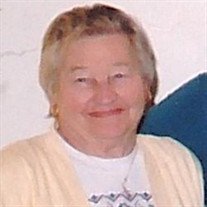 Lovie Joyce Carney, 87, passed away peacefully at Essex Nursing Home on Friday, March 12, 2021. She was born in Clifty, Kentucky on May 1, 1933, a daughter of the late Lindle and Doris (McNew) Dunn.

She was first married to Charles Keeley for 25 years before he preceded her in death. On January 7, 1995 she was married to Richard M. Carney, he passed away on February 18, 2017.

She was a devoted wife, mother, grandmother, and great grandmother. She enjoyed coloring, bird watching, and cherished all the moments she had with her family.

In addition to her parents and her husband, Joyce was preceded in death by a brother, Jean Dunn; sisters, Lavine Golden and Mae Baker.

Visitation will be held on Thursday from noon until the time of service at the funeral home in Lebanon. Interment will follow services at Whiteman Cemetery in Michigantown, Indiana.

Memorials may be made in her honor to the Lebanon Rock Church, 504 East Elm Street, Lebanon, Indiana 46052.