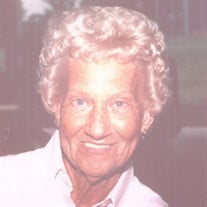 Marjorie Etta “Marge” Holladay, 97, of Thorntown, passed away Thursday, November 18, 2021 at The Waters of Lebanon with her loving family by her side. She was born in Boone County on July 6, 1924; a daughter of the late George Paul and Kathleen (Jacoby) Williams.
She attended Pinnell High School and on September 23, 1940 in Louisville, Kentucky; she was united in marriage to Cecil T. Holladay, he passed away August 21, 2004.
Marge worked many years as a seamstress at the Thorntown Garment Factory. Following that she retired with the Highway Department. In addition to all the unconditional love and support she gave to her family, Marge enjoyed playing marbles, crocheting, sewing and sitting on her front porch. She was a patient, kind and caring lady who will be greatly missed by all who knew her.
Marjorie leaves behind her daughters: Ann (Jerry) Essex of Lebanon, Linda (Dale) Coffman of Thorntown; grandchildren, Kelly (Carl) Bevard of Thorntown, Dale (Amy) Coffman, Jr. of Lebanon, Jodi (Kerry) Vanausdall of Lebanon, Brent Essex of Brownsburg, Jerri (Joe) Glasson of Lebanon, Cheryl (Todd) York of New Castle, Melanie (Brian) Lesser of Lebanon; numerous great grandchildren, great-great grandchildren and several great nieces and nephews.
In addition to her parents and husband, Marge was preceded in death by a son, Ronnie Holladay; grandsons, Mike Coffman and Ronnie Ray Holladay; granddaughter, Robin Essex; great-great granddaughter, Adalynn Beard; and six siblings.
Funeral Graveside Services will be held at 2:00 p.m. on Saturday, November 20, 2021 at Maple Lawn Cemetery in Thorntown, Indiana. Myers Mortuary in Lebanon, Indiana has been entrusted with her funeral arrangements.
Memorials may be given to the charity of the donor’s choice.