You Are Here:Home>Obituaries>Martha Charlene Newman 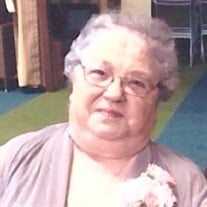 Mrs. Martha Charlene Newman, 79, passed away at home in Lebanon on Saturday, August 21, 2021. She was born in Jolietville, Indiana, on March 18, 1942, a daughter of the late Charles Edward and Martha Elizabeth (Graham) Basey.

A life resident of Boone County, Martha attended schools in both Lebanon and Thorntown. She worked in various businesses throughout Lebanon including Lord’s Dress Shop, Montgomery Wards, and the Holiday Inn. She and Kenny owned and operated Ken-Mar Sewing Center on the square of downtown Lebanon, in the late 1960s to 1970.

Martha was a devoted wife, mother, grandmother, and great grandmother as she loved her family dearly. She enjoyed playing cards, watching soap operas, talking on the phone with friends, sewing and cooking.

In addition to her parents and her husband, Martha was preceded in death by two infant sons, Charles Louis Newman and Terry Wayne Newman; her daughter and son-in-law, Diana and Brent Huard; and two brothers, Charles and Dale Basey.