You Are Here:Home>Obituaries>Mary Louise Noland 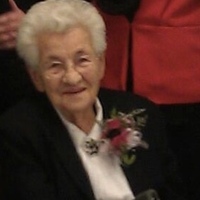 Mary Louise Noland, 99, passed away peacefully on January 14, 2022, at Homewood Healthcare in Lebanon.

Mary Lou was born October 30, 1922, in Lebanon, Indiana, the daughter of Ernest G. and Gertrude (Cramer) Giles.  She was raised on the family farm in Perry Township where she graduated as valedictorian from Perry Central School, class of 1940.

Mary Lou married James H. Noland on October 19, 1941, and together they raised five children. Her first job was as housekeeper for Dr. Rainey in Lebanon, she then worked at Winkler’s during WWII.  She worked side by side with her husband on the farm until 1970 when she started work and later retired from at Dr. Paul R. Honan’ office. She was an accomplished seamstress, making most of her daughters’ clothes through school and then their wedding and bridesmaid’s dresses. She loved to quilt, embroidery, cook, bake, garden and working on crosswords.  Her spot-on sense of humor kept everyone on their toes. A Perry Township resident, she and Jim moved into Lebanon in 1975.

Friends and family will gather on Monday, January 17 for visitation from 11 a.m. until time of funeral at 1 p.m. with Pastor David Wright officiating at Strawmyer & Drury Funeral Home, 2400 North Lebanon Street, Lebanon. Eastern Star rites will be performed at beginning of funeral service.  Mary Lou will be laid to rest in the Dover Cemetery, Dover, Indiana.  In lieu of flowers, memorial contributions in her memory may be made to Paradigm Health Foundation, 8904 Bash Road, Suite B, Indianapolis, Indiana, 46256.