You Are Here:Home>Obituaries>Michael Allen “Mike” Coffman 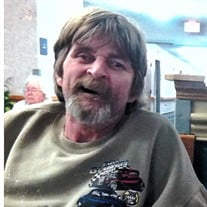 Michael Allen “Mike” Coffman, 55, of Thorntown, passed away Wednesday, October 20, 2021 at Signature Healthcare of Parkwood in Lebanon, Indiana. He was born April 24, 1966; a son of Dale L. and Linda J. (Holladay) Coffman.

He was a 1984 graduate of Western Boone Jr. Sr. High School. Mike was employed with the State Highway Department for many years, working in the road maintenance department.

Mike was a huge NASCAR fan who loved watching races. He also enjoyed, the great outdoors, spending time with his family and especially visits each Sunday with is mom. He will be greatly missed by all who knew him.

Graveside Funeral Services were held on Saturday, October 23, 2021 at Maple Lawn Cemetery in Thorntown, Indiana. Myers Mortuary in Lebanon, Indiana was been entrusted with his funeral arrangements.