You Are Here:Home>Obituaries>Michael Emmett McQueen 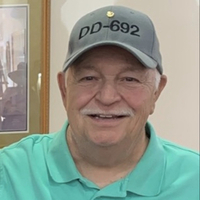 Michael “Mike” Emmett McQueen, 73, of Whitestown, peacefully passed away at his home on Friday, Feb. 25, 2022. He was born April 10th, 1948 in Indianapolis to the late William and Anna (Roska) McQueen. He married Susan (Bouck) McQueen in the courtyard of the North Methodist Church in Indianapolis on Aug. 17, 1970. During their 51 years of marriage, you rarely ever saw them apart from one another.

Mike graduated with the class of 1967 from Pike High School. During his senior year of high school, he enlisted in the Naval Reserves. Following graduation, he served in the United States Navy until 1976. During his time in the Navy, he served on the USS Allen M. Sumner DD-692.

Mike and Susan made a home in Whitestown where they were members of the Whitestown Baptist Church. Mike proudly served the community in several ways. He was an eight-year member of the Worth Township Volunteer Fire Department. He was an active member of the Whitestown Town Council where he was elected and served from 1996-2000 and again from 2000-2004. He held the position of President in 2000. Mike had a key role in the town during the beginning phases of Whitestown’s growth. Mike was a proud member for 24 years with the Whitestown American Legion Post 410. He had a massive impact on the Post where he contributed his time and talents working on building improvements. He advocated on behalf of the Post to the Whitestown Town Board and was essential part in the acquisition of additional properties for Post. He served on the Board for the post honorably, as Judge Advocate for four years. Mike was employed with Xerox and Marbaugh Engineering Supply Company.

Mike loved being with people and most that knew him likely would describe him as being a friend with an incredible sense of humor. He always had a joke or a funny story to share, even with strangers. He enjoyed playing golf, woodworking, restoring cars, cooking for his family, shopping the flea markets, and watching NASCAR. He was proud of his Scottish heritage and enjoyed attending the Indianapolis Scottish Festival. When his children were growing up, he loved camping and boating on Lake Freeman where some of their fondest memories were created as a family. One of his proudest accomplishments through those years was the time he spent coaching various youth sports in Lebanon, leaving a lasting impression on many of the children he worked with.

He is survived by his wife; sons, Pete McQueen, Jake (Kelli) McQueen of Lebanon and Luke (Michele) McQueen of Whitestown; aunt, Dorothy Terrell of Brownsburg; and grandchildren, Kanasas, Chloe, Clara, Ava and Ian McQueen, and several nieces and nephews.

Mike was preceded in death by his parents and two sisters, Judy Collette and Phyllis Ridge.

Family and friends will gather Sunday, Mar. 6 for visitation from 2 p.m. until 5 p.m. in the Strawmyer & Drury Mortuary, 2400 N. Lebanon Street, Lebanon.  You are invited to visit the website www.strawmyerdrury.com where you may sign his online register and leave a personal message.  Memorial contributions may be made to Whitestown American Legion Post 410 or the Lebanon Boys and Girls Club Lebanon Unit.