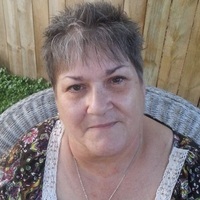 Nesta worked for Cutting Board Deli and Walmart for 20 years.  Her family always came first, attending band contests for “Sis” and Scott and sporting events for Rick. She took great pride in her grand babies.  Nesta enjoyed reading, listening to 60’s music and had an interest in politics.

Family and friends will gather Monday, April 5, 2021 for visitation from 4 p.m. until 8 p.m. in the Strawmyer & Drury Mortuary, 2400 N. Lebanon Street, Lebanon. The service will be held on Tuesday, April 6, 2021 at 1 p.m. in the funeral home. Nesta will be laid to rest at Mts. Runn Cemetery in Zionsville. Memorial contributions may be made to Mts. Runn Cemetery or the Boone County Cancer Society, 117 W. Elm Street, Lebanon, IN 46052.

Hopefully Nesta is in a casino in heaven with Terry.