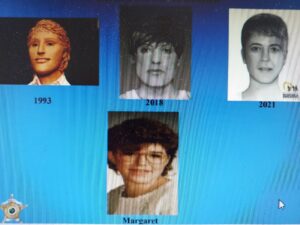 (LEBANON, Ind.) – Boone County authorities have solved one mystery and begun investigating another, 30 years after the discovery of a girl’s body along I-65.

Sheriff Mike Nielsen says a D-N-A match through a genealogy database has identified the long-unknown body as 17-year-old Maggie Sniegowski, who disappeared from Toledo, Ohio, in 1992. He says her death is now a homicide investigation.

Sniegowski’s brother Len says his sister left her belongings at home when she vanished. The family never knew whether she’d run away or been abducted. He says there was never a hint of her whereabouts until Nielsen showed up at his office near Dallas with the news a few weeks ago.

Nielsen ordered the body exhumed in 2015 after becoming sheriff, in hopes that improvements in D-N-A technology would allow pathologists to identify it. Private donations helped pay for D-N-A labs to hunt for matches. Even then, it took until last fall to connect the D-N-A sample with Len Sniegowski and another sister.

Sniegowski says the family never held a funeral, hoping Maggie would turn up. Their parents died still not knowing what had happened to her. Sniegowski says that funeral will now be held. He thanked Nielsen and other investigators for never giving up on the case.

Farmer Donnie Lawson, now a Boone County commissioner, found the body in May 1992 in a creek on an embankment off I-65 and State Road 47, near Thorntown. Nielsen says investigators believed at the time that Maggie had been strangled three days before she was found, but an autopsy was unable to confirm either the cause or time of death. A pathologist will review the records from that examination to see if today’s technology can provide more definitive answers. Meanwhile, Nielsen says investigators are already in touch with authorities in Toledo to begin trying to identify what Sniegowski calls the “lowlife” who killed Maggie.

While Sniegowski says the D-N-A samples which led to Maggie’s identification were just an attempt to trace the family tree, Nielsen says the case sends a message to the families of other missing loved ones that technology may now be able to provide answers that were unavailable even a few years ago.