You Are Here:Home>Obituaries>Agnes Rose Strong 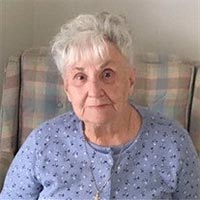 Agnes Rose Strong, 89, passed away on July 14, 2019 at her home in Zionsville. She was born on August 29, 1929 in Manhattan, New York; a daughter of the late Louis William and Antoinette Marie (Hudecek) Feyh.

She graduated from Grove Cleveland High School in Ridgewood, New York. On June 24, 1950 she was married to Alfred John Strong in Queens, New York; he preceded her in death. They lived in New York for many years before making their home in Zionsville and Agnes helped her husband become the first Roman Catholic ordained deacon in the state of Indiana.

Agnes was a charter member of the Indianapolis Quilters Guild and a member of Zionsville Christian Church.

She was a loving and caring nanny for several families in the Zionsville and Carmel areas. She was also an avid reader, loved tending to flowers in her yard and was very meticulous in sewing and quilting.

In addition to her parents, and husband, Agnes was preceded in death by one sister, Joan Kress and one brother, William Feyh.

Private Family Graveside Services will be held at Hutton Cemetery in Zionsville, Indiana.

Myers Mortuary of Lebanon, has been entrusted with her arrangements. In lieu of flowers, memorials may be directed to the charity of the donor’s choice.