You Are Here:Home>Obituaries>Barbara J. O’Rourke 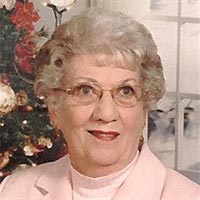 Barbara Jewell O’Rourke, 90, of Indianapolis, passed away on July 1, 2019 at Premier Hospice in Indianapolis. She was the youngest of seven daughters born on February 15, 1929, in Boone County, to Albert Lewis and Nettie Alice (Tolley) Reveal.

She was a 1947 graduate of Lebanon High School and attended IUPUI.

In 1950, she married Gerald Francis O’Rourke in Lebanon, Indiana. They divorced and he passed away in 1995.

She lived in Plymouth, Michigan, from 1967 to 1984 and later moved to Indianapolis. Barbara worked at RCA after high school with her husband in TV sales and repair. She later worked at the Indianapolis Columbia Club and Sigma Theta Tau International Honor Society for Nurses, specializing in payroll, taxes and administrative duties. She was very proud of her work with Oasis in Indianapolis.

While living in Michigan, Barbara was a past president of Eagles Auxiliary and member of Sweet Adelines (women’s singing group). She was a kind and caring lady who enjoyed crafts, crocheting, knitting, cross-stitch and line dancing.

Barbara is survived by one nephew; four great nieces and one great-great nephew.

She was the last of the Reveal girls; preceded in death by sisters, Beulah Potts, Letha A. McCluskey, Ruth Reveal, June Field, Delores Millikan and Etta Saul.

Gravesides Services are planned for 9:00 a.m. on Friday, July 12, 2019 at Oak Hill Cemetery in Lebanon.
Myers Mortuary and Boone County Crematory have been entrusted with her care.

Memorials may be made to Centenary United Methodist Church, 910 Fordice Road, Lebanon, Indiana 46052 or to the Donor’s Choice.