You Are Here:Home>Obituaries>Obituary For Carol Anderson 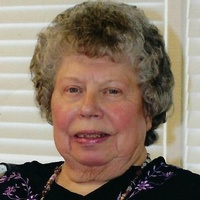 Carol Anderson, 84, passed into her Savior’s arms on Apr. 9, 2019, at Signature at Parkwood in Lebanon. Carol was born Aug. 1, 1934, to William and Mary (Shockency) Lottes. Carol graduated in 1952 from Pinnell High School. Her faith journey began at the New Brunswick Church of Christ, in Harrison Township, where she was baptized.
Carol worked for American States Insurance for 38 years. Carol started as a policy typist and progressed to a territorial underwriter in personal lines. She retired in 1998.
Carol married Eugene (Gene) Anderson on Mar. 23, 1974. After Gene’s passing on June 9, 1996, Carol moved to Lebanon, IN to be closer to family. Carol became very ill in March, 2007 and became a resident of Signature at Parkwood in April, 2007. Her primary caregivers at this time were her sister Bev and her husband, Paul.
Carol was particularly close to her sisters and to Gene’s daughter, Katie and husband Jim.
Survivors include her sisters, Marilyn Couger of Lebanon and Pat (Donald) Wade of Camden, TN; a step-daughter Kathy (Jim) Faut of Knightstown, IN; four grandchildren, six great-grandchildren and six great-great grandchildren. Carol claimed many nieces and nephews as her own and was proud of each. Carol’s sister, Beverly Voorhis passed Nov. 1, 2018 and her brother-in-law, Paul Voorhis passed June 12, 2014.
Family and friends will gather Friday, Apr. 12, 2019, for visitation from 4 p.m. until 8 p.m. and funeral services will be held on Saturday, Apr. 13, 2019, at 10:30 a.m. with Rev. Anthony Stone officiating in the Strawmyer & Drury Mortuary, 2400 N. Lebanon Street, Lebanon. Carol will be laid to rest at K of P Cemetery in Lizton, IN. You are invited to visit the website www.strawmyerdrury.com where you may sign her online register and leave a personal message.
In lieu of flowers, donations may be made to Boone County Senior Services, Boone County Mental Health or Signature at Parkwood Activity Department.