You Are Here:Home>Obituaries>Obituary For Clark Clifford “Cliff” Woody 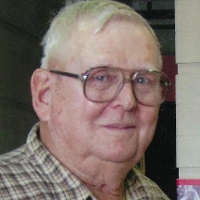 Clark Clifford “Cliff” Woody passed away June 17, 2019 at his home after a brief illness at the age of 89. He was born Feb. 26, 1930 in Thorntown, the youngest child of Clark and Lois (Long) Woody, both deceased. He lived and farmed in Thorntown his entire life except for a two year period when he served in the U.S. Army in Anchorage, AK. He also served in the National Guard.

Cliff graduated from Thorntown High School with the class of 1948; the last male in the class with three women still remaining.

Cliff married Leanna Mitchell on Oct. 4, 1952 at the Thorntown Christian Church and they had 66 years together.

Cliff was very proud of the fact that the house he lived in when he was a young boy with his parents on their 125 acre farm in Sugar Creek Township was the first house in Indiana and one of the first in the nation to be electrified through Rural Electrification Administration lines. All this happened on May 22, 1936. His father worked tirelessly to bring electricity to the countryside. Cliff enjoyed sharing many stories with friends “when the lights were turned on for the first time.”

Cliff was a member of the Thorntown Presbyterian Church until it closed Dec. 2014. He served as a Deacon, Trustee, and Treasurer for many years.

Cliff was employed by H. & R. Block Co. for a few years doing income tax work. He then started his own income tax service and enjoyed this for almost 50 years. He had a sharp mind and liked the challenges taxes provided. If he didn’t have the answer he would study and come up with an answer. It gave him pleasure when his clients were pleased and satisfied with his work and returned the next year.

The family would like to thank the Guardian Angel Hospice for their excellent service and compassion shown at this time.

Cliff is survived by his wife, Leanna; a son Dennis (Tammy) Woody of Thorntown, a daughter Dianne (Richard) Perry of Avon; grandchildren Matt (Tracie) Woody of Thorntown, Lindsey (Ryan) Musgrave of Crawfordsville, Brandy (John) Nirider of Brownsburg, and Kristen Perry of Ft. Worth, TX; great grandchildren Brodie Musgrave and Cale Musgrave and a step great grandson Adam Taha; and several nieces and nephews. Preceding him in death were his sister Charlotte Seiler, brothers Harold Woody and Richard Woody; and a grandson Andrew Perry.

Family and friends will gather Sunday, June 23, 2019, for visitation from 2-6 p.m. and funeral services will be held on Monday, June 24, 2019, at 2:00 p.m. with Rev. Marilyn Couger officiating in the Strawmyer & Drury Mortuary, 2400 N. Lebanon Street, Lebanon. Cliff will be laid to rest at Maple Lawn Cemetery in Thorntown.