You Are Here:Home>Obituaries>Obituary For Claude “Dick” Sparks 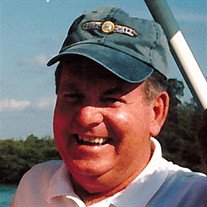 Claude Richard “Dick” Sparks, 80, of Lebanon, Indiana, passed away peacefully on Monday, March 25, 2019 at Essex Nursing Home in Lebanon. He was born on July 17, 1938 in Indianapolis, Indiana of the late Darrell David Sparks and Martha Phyllis (Frazier) Stoner.

He graduated from Lebanon High School. Dick served his country honorably in the U.S. Air Force for four years.

In August 25, 1962 he married Katheryn (Jett) Sparks; she survives and they celebrated 56 years together.

Dick was a senior engineer at Allison Gas Turbine, retiring in 1992. After retirement, he worked for Pfauter-Maag Cutting Tools before starting his own business, C.R. Sparks Co.

He was a member of the Lebanon Elks, and Indiana Gear Expo. He and Katheryn enjoyed wintering in Naples Florida as well as golfing, bike riding and taking long walks.

In addition to his parents, Dick was preceded in death by a sister Brenda (Stoner) Robinson and sister-in-law, Mary Lou Sparks.

Visitation will be on Friday, March 29 from 4:00 to 7:00 pm. at the funeral home.
Interment will follow services at Lincoln Memory Gardens in Whitestown, Indiana.