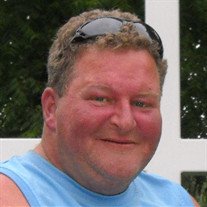 He was a graduate of Frankfort High School. Following school he enlisted in the United States Army until his medical discharge.

No Funeral Services are planned at this time.