You Are Here:Home>Obituaries>Obituary For Dottie E. Reynolds 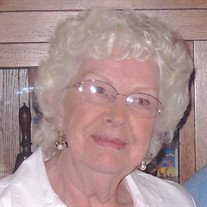 Dottie Evelyn Reynolds, 90, passed away on Sunday, March 17, 2019, at Signature Healthcare of Parkwood in Lebanon, Indiana. She was born in Wabash, Indiana on August 2, 1928, a daughter of the late Elzie and Ester (Hardacre) Green.

As a young child, Dottie was raised by her aunt, Dorothy Weigand and husband, Leo; due to her mother’s passing when Dottie was 6 years old. She attended schools in Wabash, Indiana.

In addition to her parents Dottie was preceded in death by her aunt, Dorothy Weigand and husband, Leo; one brother, Marland Green.

Private family burial of ashes will be held at a later date at Thrailkill Cemetery in Swayzee, Indiana. Myers Mortuary and Boone County Crematory has been entrusted with her care.

Memorials may be made in Dottie’s memory to the charity of the donor’s choice or St. Jude’s Children’s Hospital. Online condolences: myersmortuary.com