You Are Here:Home>Obituaries>Obituary For Doyle H. Clay, Sr. 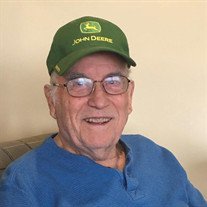 Doyle Houston Clay Sr., 86, of Frankfort, Indiana, passed away on July 2, 2019, at Homewood Health Campus in Lebanon, Indiana. He was born on April 10, 1933 in Tupelo, Mississippi, a son of the late James William and Annie Lou (McKissick) Clay.

Doyle was raised and educated in Memphis, Tennessee. Following school, he served his country honorably in the United States Army.

He was married to Ella L. (Wilson) Clay in Tennessee. She preceded him in death.

Doyle was a longtime resident of Georgia and had recently moved to Frankfort, Indiana, where he had resided the last few years. He worked as a supervisor for Del Monte Foods in both Georgia and Frankfort.

He enjoyed the outdoors gardening and hiking. Yellowstone National Park was one of his favorite spots to hike.

In addition to his parents and his wife, Doyle was preceded in death by his siblings.

No Services are planned at this time.
Myers Mortuary and Boone County Crematory have been entrusted with his cremation arrangements.