You Are Here:Home>Obituaries>Obituary For Forrest “Buster” Johnson Jr. 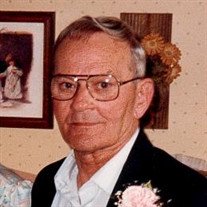 Buster graduated from Center Ridge High School. He was married in Lebanon, Indiana, on April 8, 1939, to Norma Jean (Merchant) Johnson; she passed away on December 22, 2006.

He was a milk hauler for dairy farmers and later worked for Strawmyer Gas & Electric, retiring in 1984.

Buster never met a stranger and was a joy to be around. He loved to tell a good story and enjoyed being surrounded by friends and family.

In addition to his parents and wife, Buster was preceded in death by six brothers, John, Jackie, Billy, Victor, Robert, and Frank; two sisters, Annie Sheets and Margie Beck; and a son-in-law, Charles “Duke” Jamison.

Graveside Services will follow visitation at 3:00 p.m. at Oak Hill Cemetery in Lebanon.

Memorials may be made in Buster’s memory to Meals on Wheels, 1626 Douglas Lane, Lebanon, IN 46052