You Are Here:Home>Obituaries>Obituary For Helen M. Ford 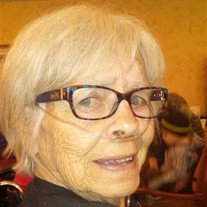 Helen Margaret Ford, 84, passed away on Wednesday, April 10, 2019, at Homewood Health Campus in Lebanon, Indiana. She was born in Crawfordsville, Indiana, on October 5, 1934, a daughter of the late Everett and Fanny May (Kidd) Baldwin.

Helen attended Crawfordsville High School. In 1951, she married Guy A. Ford, Sr. in Crawfordsville; he passed away on August 8, 2001.

She was a member of Red Hat Society/ WINN Ladies. Helen was a homemaker and she enjoyed watching sports, gardening, and loved spending time with her grandchildren.

In addition to her parents and husband, Helen was preceded in death by a daughter, Debbie Caldwell; brothers, Ronald “Ron” Baldwin and Everett Baldwin; sisters, Hattie Nelson, Nancy Miller and Freda Woodall.

Visitation is planned from 10:00 a.m. until the time of the service on Monday at the funeral home in Thorntown. Interment will follow services at Maple Lawn Cemetery in Thorntown, Indiana.

Memorials may be made in her memory to the Thorntown Police and Fire Department, 107 West Main Street, Thorntown, IN 46071 or charity of the donor’s choice. Myers & Hunt Mortuary will be handling her arrangements.