You Are Here:Home>Obituaries>Obituary For Karen Coy 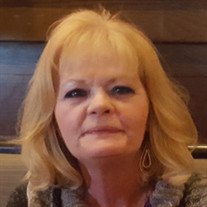 Karen Sue Coy, 62, passed away Tuesday, May 28, 2019, at Essex Nursing and Rehabilitation Center in Lebanon, Indiana. She was born on April 25, 1957 in Indianapolis, Indiana, a daughter of Greta V. (McCoy) Zeralsky and the late Billy Ray Hinkle, Sr.

She graduated from Zionsville High School in 1975. Following high school she worked in the restaurant business as a cook, waitress, manager and owner. Her last employment was at American Health Network in Lebanon.

Karen attended Trinity Chapel and Access Church in Lebanon. She lived life to the fullest and loved being with family. She also enjoyed NASCAR, Colts, listening to music, gardening, baking and cooking, which she was really good at.

Visitation is planned from noon to 2:00 p.m. on Thursday, June 6 at Myers Mortuary, 1502 North Lebanon Street, in Lebanon, Indiana. Funeral Services immediately following at 2:00 p.m. on June 6 at the funeral home in Lebanon.

Memorials may be directed to charity of the donor’s choice.