You Are Here:Home>Obituaries>Obituary For Nancy S. Bowman 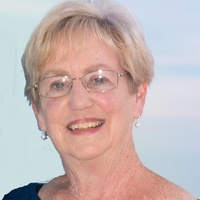 On April 17, 2019, Nancy S. Bowman, our beloved wife and mother ended her battle with cancer, let go of our hands, and passed peacefully into the waiting arms of her Lord and Savior Jesus Christ.
She is survived by Rex Bowman, her husband of 52 years, and two daughters, Leigh Anne (John, jr) Russell of Xenia, OH and Kristen (Kerry) Dunn of Lebanon. She is also survived by four grandchildren, Jesse Russell of St. Charles, MO, Michael Dunn of Lebanon, Abigail Russell of Xenia, and Audrey Dunn of Lebanon; two sisters, Patricia (Larry) Newton of Michigantown and Jayne Courtot of Lebanon; and one brother, Ron (Peggy) Weaver of Michigantown; an exchange daughter, Elina (Tony) Salo of Paris, France; two honorary grandchildren, Laura Salo of Helsinki, Finland and Henry Salo of Paris; and numerous brothers- and sisters-in-law, nieces and nephews, and great-nieces and great-nephews.
Nancy was born in 1945, the third child of Jesse and Daisy (Strong) Weaver, who preceded her in death. Her step-father, Don Schimmel, also preceded her in death. Nancy grew up in Boyleston, committed her life to Jesus at the Boyleston Baptist Church, and was an honor student, cheerleader, and student council president at Clinton Central High School.
During Nancy’s sophomore year, the quarterback of the football team called to ask her about geometry homework. He started walking her to class the next day, walked her down the aisle of her home church in 1967, and walked continually by her side until the moment she died.
Nancy worked at Carr Cabinets, National Seal, Marion-Adams Jr/Sr High School, and then Verizon, where she was an executive secretary and received a Certified Professional Secretary designation. She moved from her secretarial position to become an event planner, where she coordinated Verizon’s corporate hospitality at events like the Indianapolis 500, Brickyard 400, Bluegrass Stakes, and several golf tournaments and NCAA basketball tournaments. She met racing greats like Rick Mears and Mario Andretti, comedians like Jay Leno and Jeff Foxworthy, and numerous college and professional coaches and athletes.
After retirement, Nancy and Rex loved to travel. They visited 49 of the 50 US states and several European countries. They also loved to take road trips to visit local landmarks, always in search of barn quilts, waterfalls, beautiful flowers and foliage, and the perfect breaded tenderloin. But perhaps their favorite trips were to visit their grandchildren or to watch them compete in athletic and academic tournaments, both local and as far away as Denver, Detroit, St. Louis, Chicago, and Orlando.
An avid sports fan, Nancy traveled with her husband to numerous Indiana-Kentucky All Star games, Butler basketball games, and NCAA tournaments, including several trips to watch the Final Four. Because her husband was a coach and athletic director, Nancy spent many, many hours watching local high school games as well as following the teams on which her children and grandchildren participated.
Nancy volunteered her time at church and at the Lebanon Community of Shalom. Over the years she taught Sunday School and Vacation Bible School, served as a greeter and welcome center hostess, and filled many other roles. She was a board member at Lebanon Community of Shalom and enjoyed helping with the annual garden tour. In spite of her busy schedule, she always had time to care for friends and family by providing meals, transportation to medical appointments, and a warm welcome at what came to be known as the “Bowman B&B”.
Nancy was diagnosed with pancreatic cancer on December 13, 2018. During the subsequent chemotherapy, two heart attacks, and being turned into a “polka dot pincushion” by numerous needle sticks for lab draws and treatments, her faith never wavered. She never asked, “Why me?” She demonstrated her faith and courage to her family and friends on a daily basis and set a shining example of grace under pressure for all who knew her. At her final meeting with her oncologist, Nancy told him, “I know where I am going.”
Some of Nancy’s favorite quotes were:
And we know that in all things God works for the good of those who love him, who have been called according to his purpose. – Romans 8:28 KJV
“Death is not extinguishing the light; it is only putting out the lamp because the dawn has come.” – Rabindranath Tagore
“Don’t cry because it’s over. Smile because it happened.” – Dr. Seuss
Friends and family are invited to call at the Strawmyer & Drury Mortuary, 2400 N. Lebanon Street, Lebanon, from 4 p.m. until 8 p.m. on Fri., Apr. 26, 2019. John Russell, retired minister of Lakeside Christian Church in Lakeside Park, KY, will officiate at a Celebration of Life Service beginning at 10:30 a.m. on Sat., Apr. 27, 2019, at Strawmyer & Drury Mortuary. Interment will follow at Whiteman Cemetery.