You Are Here:Home>Obituaries>Obituary For Paula Soto Caudillo 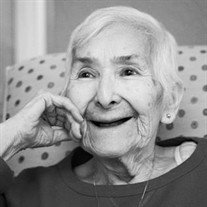 In 1956, she and Antonio left San Antonio, Texas to later settle in Indiana. Paula retired from Raymark Corporation of Crawfordsville in March 1993. She attended St. Joseph Catholic Church; however, was at home in any house of worship.

Not only did she enjoy working on the family farm and operating the equipment, she also enjoyed expressing herself artistically through sewing, crocheting, and embroidery. Paula was never intimidated by life’s challenges, as a result she either learned quickly or was self-taught. Her talents will be greatly missed.

In addition to her parents and her husband, Paula was preceded in death by a daughter, Marta Fields.

Funeral Services will be held at 1:00 p.m. on Saturday, April 6, 2019, at Myers Mortuary, 1502 North Lebanon Street, in Lebanon, Indiana.
Visitation is planned for 10:00 a.m. until the time of the service at the funeral home in Lebanon.
Interment will follow at St. Joseph Cemetery in Lebanon.

In lieu of flowers, memorials may be directed to the American Diabetes Association, 8604 Allisonville Road, Suite 140, Indianapolis, Indiana 46250.