You Are Here:Home>Obituaries>Obituary For Rev. Raymond H. Duff 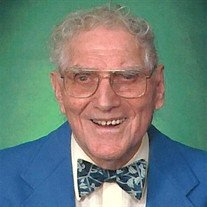 Raymond was a 1937 graduate of Pinnell High School and attended Indiana Christian University.

During his years of ministry, Raymond also enjoyed the country life and farmed for 54 years. In addition to ministry and farming, he was a well-known carpenter who volunteered his skills and time to Habitat for Humanity. In January 1992, he was honored to receive the Sagamore of the Wabash Award for his distinguished service to Indiana. Raymond was a good man dedicated to ministry and devoted to his family, whom he loved dearly.

One Daughter: Patricia Gulley and husband, Robert of Fillmore

Visitation is planned for Sunday, April 14, from 2:00 p.m. to 6:00 p.m. at New Brunswick Church in Lebanon. Interment will follow at Oak Hill Cemetery in Lebanon, Indiana.

In lieu of flowers, memorials may be made in Raymond’s memory to New Brunswick Church of Christ, 6480 South State Road 39 Lebanon, Indiana 46052.

Myers Mortuary is handling the arrangements.