You Are Here:Home>Obituaries>Obituary For Russell Edward Pittman 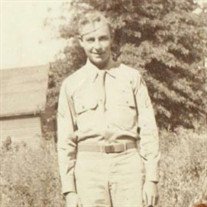 He graduated from Sullivan High School and entered the United States Army Air Corps in 1943. Russell served during WWII and was on the 419th Night Fighter Squadron, receiving many honors and medals.

Russell was a machinist for Standard Change-Makers, Inc. who was a dedicated employee for forty years. He had a love for all animals and in his spare time he enjoyed fishing, cooking, being with family, playing cards and checkers.

In addition to his parents and wife, Russell was preceded in death by an infant daughter; one son, Steven R. Pittman; grandson, Jeremiah Rogers; brother, Otis Pittman and one sister, Pearl Dean.

Visitation will be held from 11:00 a.m. until the time of service on Friday at the funeral home in Lebanon.