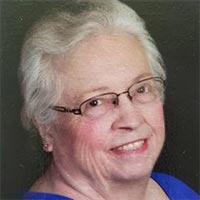 Sharon was born on September 8, 1945 to Russell and Helen Bonwell Shepherd. She was one of eleven beautiful children. Sharon attended St. Joseph’s Elementary School, Lebanon High School Class of 1963 and Indiana Business College of Indianapolis.

She worked at a few locations, Commercial Filters and Stuart-Warner both of Lebanon, Indiana and Western Electric in California, before joining Purdue University as a Secretary Supervisor in the Chemistry department. It was in this department where she met the love of her life, John R. Schwier from Cincinnati, Ohio. Sharon and John married on December 22, 1973 at St. Joseph’s Catholic Church in Lebanon, Indiana.

Sharon had three children: Joleen, Shari and Jonathan. She dedicated her life to motherhood, family and volunteer work, including craft bazaars at St. Malachy Church in Brownsburg, Indiana.

Sharon loved family, birds, flowers and fishing at the cabin. In her earlier years she was known for treasure hunting contests with her metal detector and even dancing.

On Saturday, July 6, 2019, around 1:30pm central standard time, Sharon earned her wings and was called Home to the Lord. She died from heart failure, peacefully, at the cabin on the lake in Minnesota, with family by her side.

Sharon was preceded in death by her sister Martha, her father Russell, her young nephew Eli, her mother Helen, her father-in-law Richard Schwier, mother-in-law Vera Schwier and brothers-in-law David Denney and Joseph Garst.

Her showing will be Wednesday, July 17th from 4:00-8:00 p.m. at Myers Mortuary, 1502 North Lebanon Street, Lebanon, Indiana. Funeral mass will be Thursday, July 18th, at 10:00 am at St. Joseph’s Catholic Church, 319 East South Street in Lebanon with burial to follow at St. Joseph’s Cemetery.

In lieu of flowers, the family requests donations to St. Joseph’s Catholic Church, the Little Sisters of the Poor, masses for Sharon or to any other charity of your choice in her honor.