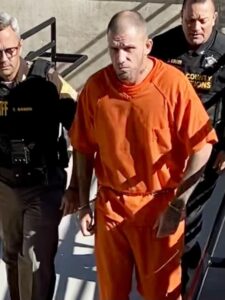 A Thorntown man is accused of murder in connection with the September deaths of two men and a woman in a Lebanon apartment. All three were shot in the head, police said in a probable cause affidavit. An acquaintance found the bodies of Larry ‘Beeker’ Stogsdill Jr., 42, his son Brannon Martin, 20, and Martin’s fiancé, Grace Bishop, 19, in an apartment at 403 E. Walnut St., Lebanon, at about 6 p.m. Sept. 8, police said. Chad M. Grimball, 40, was already being held without bond in the Boone County Jail on previous charges Tuesday.  More details in the Lebanon Reporter.