You Are Here:Home>Obituaries>Rebecca Jane “Becky” Blackstone 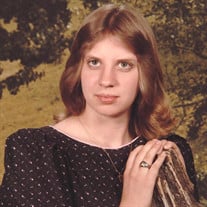 Rebecca Jane “Becky” Blackstone, 56, of Thorntown, Indiana, passed away on Sunday, December 5, 2021, at St. Vincent Hospital in Indianapolis. She was born in Frankfort, Indiana on July 7, 1965, a daughter of Gail M. and Priscilla J. (Reagan) Bolinger.

She was a 1984 graduate of Western Boone Jr. Sr. High School. In high school she was active in FHA and 4-H.

On October 6, 1984, she was married to Jack Blackstone in Mechanicsburg, Indiana. They later divorced but remained good friends and he survives.

Becky studied conservation and nursing. She was a caregiver in nursing homes and in private homes. She later worked for Stalcop, Inc. in Thorntown.

She loved flower gardening and being outdoors. She was kind with a soft heart who adored her cat, loved her family and deeply loved her grandson.

Becky was preceded in death by a sister, Sheila E. Bolinger.

Funeral Services are planned for 3:00 p.m. on Sunday, December 12, 2021, at Myers Mortuary, 1502 North Lebanon Street, in Lebanon, Indiana. Visitation will be held from 1:00 p.m. until the time of services at the funeral home in Lebanon.

Boone County Crematory has been entrusted with her cremation arrangements following services.